(St. Joseph News-Press) CONCEPTION, Mo. — For more than 1,500 years, Benedictine monks have welcomed the world through their doors. One 21st-century gunman isn’t going to change a tradition that’s survived the Dark Ages and wars.

As the first day dawned after the shootings, 65 Conception Abbey monks were determined to bring peace back to their world. Spending Monday evening’s meal and vespers with sisters at the Benedictine Sisters of Perpetual Adoration convent at Clyde, Mo., they then came home to their own beds.

“We are not going to be led by fear,” Abbot Gregory Polan said. “In a world where people face alienation and fear, we want to remain a place where they can come to stay in peace.”

After a few hours sleep, he was up to talk to invalid monks at the monastery, who had been in lock-down. The infirmary’s service was the only one held early Monday morning — by the Rev. Philip Schuster. Within two hours, he was dead.

“I didn’t want to go into the monastery,” the abbot said. “I knew I couldn’t go through the tunnel. I was spooked. It’d be foolish to say there’s no evil involved. Maybe more a kind of sickness we don’t deal with. But I’m determined we won’t be governed by fear.”

At 8:40 a.m. Tuesday, bells began to toll for the two missing monks, one peal for each year of service. For the Rev. Schuster, 51 times; for Brother Damian Larson, 32 times. Normally done at the time of death, this was a second-best alternative, the abbot felt.

“The bells brought it home to me,” Abbot Polan said. “That has been one of the most dramatic moments.”

Mass was held in a student chapel, because, until today’s planned cleansing of the church, it couldn’t be used.

“The word martyr means witness,” the abbot said to dark-robed, somber monks. “We look to our two brothers, who were witnesses.”

Few staff were at work Tuesday, but those who were there said they were safe.

“This is a different house,” Mr. Stransky said. “The people that live here are more at peace than what you see in the outside world. The employees share in the monks’ vision and beliefs.

“A lot of the staff are feeling anger, a selfish anger, because something was taken from us in a selfish manner. But we’ll get through this. The peace will be restored.”

Dan Madden, communications director, shudders to remember Monday morning’s fear and worry, especially while bringing in a visiting repairman from the abbey grounds during the law’s lock-down.

“Now I don’t feel fear at all,” he said Tuesday. “My feeling is only of loss — but I don’t live here. I would never put myself in the monks’ shoes, feel their pain. They’re brothers. They’ve taken vows together. They’re prayerful men, gentle men, meek men, but also tough men.”

Benedictine monks believe they come to the monastery to die — to die away from selfishness and pride. Real death is just a final step, viewed as a celebration. Often-humorous wakes say goodbye to their friends when they pass on.

Tragedy’s door will close Friday morning when the two monks are laid to rest. Abbey carpenter Norb Schieber is ready with two coffins, handmade of cheapest white pine with a cross etched into the top — sawdust-lined, he said, to signify “dust to dust.” He said neither of the monks would want abbey traditions to change because of their deaths.

“Father Philip used to joke every day that he was ready to die.

The abbot repeats his determination again and again.

“We’re moving out of the shock into the reality of this,” Abbot Polan said. “And we will continue the 1,500 years of Benedictine hospitality.” 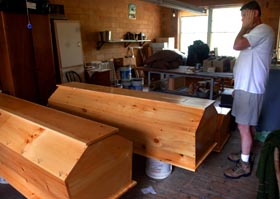 Norb Schieber, Conception Abbey’s carpenter, stands in front of the coffins that will be used to bury the two monks killed by a gunman Monday. He said he considered the coffins his final gifts to the men who were his friends. (IVAL LAWHON JR./News-Press)