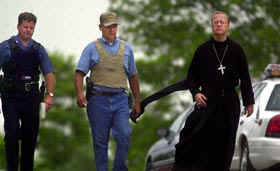 CONCEPTION, Mo. — Gunshots startled the peace, prayer and welcome built during the last 129 years by a group of Benedictine brothers.

“We’ve never had anything like this,” Abbot Gregory Polan said. “Benedictine monks are devoted to peace.”

Two longtime and well-known monks died in the attack:

Brother Damian Larson, 64, a groundskeeper and the abbey’s oft-quoted weatherman;
The Rev. Philip Schuster, 85, the abbey’s porter who greeted all visitors to the monastery.

The Rev. Kenneth Reichert, 68, was shot in the abdomen and flown to Heartland Regional Medical Center by a LifeNet medical helicopter. A spokesman for the hospital late Monday said the Rev. Reichert was in serious condition but is expected to survive. The hospital reported the priest, with doctors’ advice, elected not to receive surgery for his wound. The Rev. Reichert is the abbey’s prior, which is the second-in-command to the abbot.

The Rev. Norbert Schappler, a native of Atchison, Kan., 73, was shot in the groin and leg. He was taken by Nodaway County ambulance to St. Francis Hospital in Maryville, Mo. The Rev. Schappler was in stable condition late Monday. He’s in charge of the abbey’s dining room and is the art director at the abbey print shop.

The abbey’s normal quiet calm was punctured by the first gunshot about 8:35 a.m. Monday.

“The sound of what I thought was a large window crashing drew me out into the hall,” Abbot Polan said. “Then I heard two shots followed by three shots. It was just a very clear sense that this was a moment of danger.”

Moments before the abbot heard shots, Mr. Jeffress was seen getting out of his late-model, green Chevrolet Cavalier with two long boxes, Mr. Lyon said.

Mr. Jeffress entered the center basilica doors and placed both boxes on a table to the right of the doors, the trooper said.

He opened the boxes and removed a MAK 90 assault rifle (a copy of the AK47) and a Ruger .22-caliber rifle.

The shooter spoke to no one and proceeded down the long hall of the building that is home to the abbey’s monks, Mr. Lyon said.

The monks were on the way to start their work day, said Dan Madden, an abbey spokesman.

At the end of the hall, Mr. Jeffress turned right and walked toward the dining room.

The Rev. Reichert and the Rev. Schappler stepped out into the hall behind Mr. Jeffress.

Mr. Jeffress turned and fired two more shots from the assault rifle. The two wounded monks fell back into their office.

Mr. Jeffress walked back and shot the Rev. Schappler a second time.

“I don’t know how (the Rev. Schappler) did it, but he dragged himself down the hall to a phone and called 911,” Mr. Lyon said. “The loss of blood was tremendous.”

The shooter retraced his steps back toward the basilica. Along the way, he met the abbey’s greeter, the Rev. Schuster.

“Mr. Jeffress greeted (the Rev. Schuster) with two shots — one in the head and one in the chest — and moved on back to the basilica,” Mr. Lyon said.

Mr. Jeffress then went to the abbey basilica and sat down in a rear pew. Mr. Jeffress lifted his other weapon, the .22-caliber rifle. Most of the rifle’s stock was cut off. The shortened stock allowed Mr. Jeffress to hold the weapon to his left temple, and he fatally shot himself, Mr. Lyon said.

Law enforcement officers continue to search for the man’s motive. Investigators showed all of the monks a photo of Mr. Jeffress. None recognized the photo or the man’s name.

Authorities are searching for Mr. Jeffress’ daughter in an attempt to establish a motive.

“We have no connection with (Mr. Jeffress),” said Abbot Polan. “No connection. We have not found anything to connect him to us. Total stranger.”

The suicide occurred about the same time that the abbot was dialing 911. The abbot reported the shooting and picked up another phone to begin passing the word to the monks to stay put until help arrived.

When officers entered the monastery, they found a blood-covered main floor.

“When we came in,” Mr. Espey said, “many monks were locked in their rooms, scared to come out.”

Law-enforcement personnel removed anyone who could be found in the monastery, the sheriff said.

About 80 monks, employees and guests were on the campus grounds at the time of the shooting, Mr. Madden said. All of the abbey’s 90 seminary students had already left for summer vacation, he said.

After the evacuation, everyone pulled back to wait for the Highway Patrol’s special emergency-response team to arrive.

That’s because safety dictated a further search because an initial description from one witness didn’t match the man found in the basilica.

About 12 members of the emergency-response team arrived from Lee’s Summit, Mo., and conducted a search of all buildings and the 30-acre campus, Mr. Lyon said. The room-by-room search lasted until 4 p.m. Monday.

Mr. Jeffress’ car also dictated a cautious approach. Officers noticed a large, cardboard box in the back seat of the car, which was parked about 150 feet from the basilica’s main doors. Investigators feared the duct-taped box could contain an explosive.

The Bureau of Alcohol, Tobacco and Firearms was notified, and two bomb officers with the Olathe (Kan.) Fire Department, who also are federal marshals, were flown to Conception.

A small explosion was used to neutralize the package, then it was opened. Officers discovered only fishing gear and instructions for firing weapons at a shooting range inside the box, Mr. Lyon said.

Later, law-enforcement officers were concerned about moving the bodies to the coroner’s office.

“They asked us if we wanted (Mr. Jeffress’ body) taken to the morgue separately from our brothers’ bodies,” Abbot Polan said. “I said no. We’re all children of God. They’re all going to the coroner together.”