Catholics throughout area shocked and horrified

Gunshots that broke the peace in the prayerful halls of Conception Abbey on Monday ricocheted in grief, shock and confusion throughout the Catholic community in Northwest Missouri. 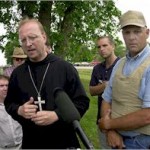 Abbot Gregory Polan, left, talks to the media while Nodaway County Sheriff Ben Espey, right looks on outside the Conception Abbey in Conception, Mo. Monday, June 10, 2002. Two Benedictine monks were killed and two others wounded when an unidentified gunman entered the building and opening fire on the men before killing himself. (AP Photo/Charlie Riedel)

What was painfully clear to local leaders in the Catholic Church was this irony: that the open-door hospitality exemplified by the Benedictine monks for centuries could be turned on itself in an act of such violence.

“We’re taught to receive every visitor as if they are the face of Christ himself,” said Brother Columba McNeill, who attended seminary at Conception Abbey before becoming a professor at Benedictine College in Atchison, Kan.

That a home of religious worship and study could be turned into a bloodbath, not unlike recent school shootings, was too much to bear for Catholic leaders.

“I’m absolutely shocked, horrified, appalled and tremendously saddened that a place dedicated to peace, prayer, service and hospitality would have to suffer such a misfortune,” said the Rev. Joseph Cisetti, a pastor at the Immaculate Conception Parish in Richmond, Mo., and an administrator in the Catholic Diocese of Kansas City-St. Joseph.

The local diocese is closely tied to the order of Benedictine monks. Five of the 90 seminary students attending Conception Abbey in the last academic year, which ended in May, represented the Kansas City-St. Joseph diocese.

And for many local priests, including the Rev. Cisetti, a former Conception Abbey seminarian, grief following the fatal shooting was very personal.

“I was just there last week on retreat,” he said. “I prayed next to one of the monks (who was killed).”

Religious leaders could only speculate as to why the Benedictine monastery was the target of violence.

“Did it relate to displeasure with priests in general or Conception Abbey in particular?” said the Rev. Mike Volkmer, pastor at St. Francis Xavier Church.

Rebecca Summers, a spokeswoman for the diocese, said the diocese did not know if the shootings were related to the sex-abuse scandal that has beset the Catholic Church in recent months.

But the Rev. Matthew Brumleve, pastor at St. Patrick’s Catholic Church in St. Joseph, didn’t rule out that possibility.

“My initial reaction is it must be someone who’s mad at the church, and in particular mad at Conception,” he said. “Maybe someone who was kicked out of the school — either that, or he just snapped and happened to be in Conception.”

The abbey had received no threatening letters or phone calls to hint that the attack was imminent, the Associated Press reported. The monks at the abbey also were shown a photo of the man who attacked the abbey, and none recognized the photo or the man’s name, said Sgt. Sheldon Lyon, a spokesman for the Missouri State Highway Patrol.

Whether motivation for the incident was related to allegations of sexual abuse within the Catholic church, Dan Carey, president of Benedictine College, said the religious community has to mobilize its support.

“The (Catholic) church is in the news now, yes, but this a tremendous time for us all to pull together,” Dr. Carey said. “And our prayers go out to the Conception Abbey community, especially the friends and families of the victims.”

Monday’s tragedy was the first time this kind of violence has hit this close to home. And that caused fear in the area.

The Benedictine Sisters of Perpetual Adoration in Clyde, Mo., whose campus is only two miles away from Conception Abbey, locked down their compound within minutes of hearing of the shootings.

“We’re obviously very, very saddened and shocked,” said Sister Rebecca Leis. “For over 125 years, we have joined in prayer, worship, study and friendship, and now are sharing our grief.”

“The next thing you know,” he said, “we’ll all be wearing bulletproof vests at the altar.”