During the camp, I had inappropriate sexual contact in my living quarters with… a member of the Abbey Boy Choir. – Bede Parry, May, 2011

I have since recognized that I may have acted inappropriately with at least one other member of the Abbey Boy Choir. – Bede Parry, May, 2011

Everything that I have done in my life has been with me, and haunting me, every day. I dream about it. I think about it. Not a day passes when I do not regret my conduct. I am truly sorry. – Bede Parry, May, 2011 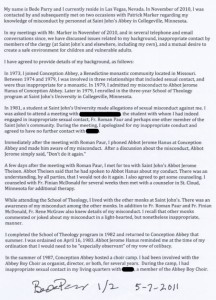 My name is Bede Parry and I currently reside in Las Vegas, Nevada. In November of 2010, I was contacted by and subsequently met on two occasions with Patrick Marker regarding my knowledge of misconduct by personnel at Saint John’s Abbey in Collegeville, Minnesota.

In my meetings with Mr. Marker in November of 2010, and in several telephone and email conversations since, we have discussed issues related to my background, inappropriate contact by members of the clergy (at Saint John’s and elsewhere, including my own), and a mutual desire to create a safe environment for children and vulnerable adults.

I have agreed to provide details of my background, as follows:

In 1973, I joined Conception Abbey, a Benedictine monastic community located in Missouri. Between 1974 and 1979, I was involved in three relationships that included sexual contact, and were thus inappropriate for a monastic. In 1979, I admitted my misconduct to Abbot Jerome Hanus of Conception Abbey. Later in 1979, I enrolled in the three-year School of Theology program at Saint John’s University in Collegeville, Minnesota.

In 1981, a student at Saint John’s University made allegations of sexual misconduct against me. I was asked to attend a meeting with [St. John’s Victim #1], the student with whom I had indeed engaged in inappropriate sexual contact, Fr. Roman Paur and perhaps one other member of the Saint John’s community. During the meeting, I apologized for my inappropriate conduct and agreed to have no further contact with [St. John’s Victim #1].

Immediately after the meeting with Roman Paur, I phoned Abbot Jerome Hanus at Conception Abbey and made him aware of my misconduct. After a discussion about the misconduct, Abbot Jerome simply said, “Don’t do it again.”

A few days after the meeting with Roman Paur, I met for tea with Saint John’s Abbot Jerome Theisen. Abbot Theisen said that he had spoken to Abbot Hanus about my conduct. There was an understanding, by all parties, that I would not do it again. I also agreed to get some counseling. I counseled with Fr. Finian McDonald for several weeks then met with a counselor in St. Cloud, Minnesota for additional therapy.

I completed the School of Theology program in 1982 and returned to Conception Abbey that summer. I was ordained on April 16, 1983. Abbot Jerome Hanus reminded me at the time of my ordination that I would need to be “especially observant” of my vow of celibacy.

In the summer of 1987, Conception Abbey hosted a choir camp. I had been involved with the Abbey Boy Choir as organist, director, or both, for several years. During the camp, I had inappropriate sexual contact in my living quarters with [John Doe 181], a member of the Abbey Boy Choir.

Soon after the incident with [John Doe 181], I left Conception Abbey for Jemez Springs, New Mexico. Abbot Jerome Hanus drove me to the airport. I took part in a three-month program at the Servants of the Paraclete facilities.

I have since recognized that I may have acted inappropriately with at least one other member of the Abbey Boy Choir.

Late in 1987, I finished the Paraclete program and accepted a job, as choirmaster and organist, at St. Timothy Lutheran Church in Albuquerque. I continued to receive therapy from a female counselor, Margaret, in Santa Fe.

I am aware that in 1990, someone from Conception Abbey asked [John Doe 181’s parents] about my potential return to the area. I am unaware of the details of the conversation but was told by Abbot James Jones that it would “not be wise” for me to return to Conception Abbey.

In 2000, I was recruited by Mary Bredlau to work at All-Saints Episcopal Church in Las Vegas.

Also in 2000, I considered joining the Prince of Peace monastery in Riverside, California. Prince of Peace had me undergo a series of psychological tests. After the testing, Prince of Peace’s Abbot Charles Wright informed me I was no longer a candidate. The psychological evaluation had determined that I had a proclivity to reoffend with minors. Abbot Wright called Conception Abbey’s Abbot Gregory Polan with this information.

In 2002, I pursued a cooperative dismissal from the Catholic Church. Fr. Dan Ward, a canon lawyer from Saint John’s Abbey in Collegeville, Minnesota, prepared the documents.

I have only recently begun to understand how my misconduct has affected my victims.

Everything that I have done in my life has been with me, and haunting me, every day. I dream about it. I think about it. Not a day passes when I do not regret my conduct. I am truly sorry.

About the Statement and this Web Site… Here 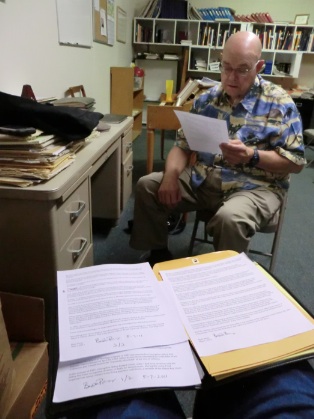