“This is their last tiny journey,” said Bishop Raymond Boland, of the Diocese of Kansas City-St. Joseph, “the fulfillment of their pilgrimage.”

The Rev. Norbert Schappler made a journey of his own Friday just by attending the funeral service. The Rev. Schappler is one of two victims who survived being shot Monday by Lloyd Jeffress. Rev. Schappler is a patient at Heartland Regional Medical Center and was escorted to the service by nurses.

The Rev. Schappler joined more than 1,000 other mourners for the peaceful ceremony in the abbey’s Basilica of the Immaculate Conception, where Lloyd Jeffress’ committed suicide after shooting four monks, killing two, on Monday.

“So many people who have written to me these days have expressed their deep sorrow that something like this would happen in a place they associated with peace, tranquillity and prayer,” said Abbot Gregory Polan. “Yes, there has been an injury to the peace of this household of faith, but it has not destroyed that essential element of our Benedictine life.”

The funeral service embodied the characteristics of which Abbot Polan spoke. Even though the basilica was completely filled, when the funeral bells rang in the church and throughout the hills of rural Nodaway County, silence dominated.

But the voices of the congregation joined together as one and filled the high-ceilinged sanctuary as the Rev. Schuster’s and Brother Damian’s simple, wooden coffins draped with colorful fabrics were brought to the center of the room.

Hymns were sung and the congregation answered in unison to the various speakers who read passages from the Bible.

In the homily, Abbot Polan said, it isn’t up to the congregation to question the deed, even though the community wonders why Mr. Jeffress committed the violent acts.

“Right now, there is speculation about what gave rise to the motive Mr. Jeffress had for his action,” Abbot Polan said. “That may be the important work for law enforcement, but it is not our work at the moment. The work of this monastic community and those who walk this path with us is to wait in faith and in prayer for the Lord to unfold for us the meaning of this mystery before us.”

He also asked the congregation not to hate Mr. Jeffress.

“When brutal deeds are enacted, it calls for heroic and radical forgiveness,” he said. “Such acts of violence as happened here on Monday could only have come from someone in desperate need of help. Hatred, anger and an unwillingness to forgive only keep us crippled and bound by the evils that surround us.”

“Our great consolation is the belief that our two brothers were ready to meet the God who would call them at the most unexpected moment, and in the most mysterious of ways,” Abbot Polan said.

Few tears were openly shed during the ceremony that seemed like less of a funeral, which focuses on death, but more of a grand event, which focused on a transformation of life.

“While we grieve their absence among us, our faith tells us to rejoice in the new life they possess in the kingdom of God, where every tear is wiped away, where sadness and mourning flee, and where they rest tranquilly in what they sought here on earth — the beauty and peace of God,” Abbot Polan said.

It was peaceful and beautiful as mourners walked behind the bodies of the Rev. Schuster and Brother Damian in a narrow and long line to the cemetery and when they gathered around the internment site. The sky was clear, except for a few white clouds in the sky, and the grounds that Brother Damian had lovingly planted and sculpted gleamed in the sunlight. 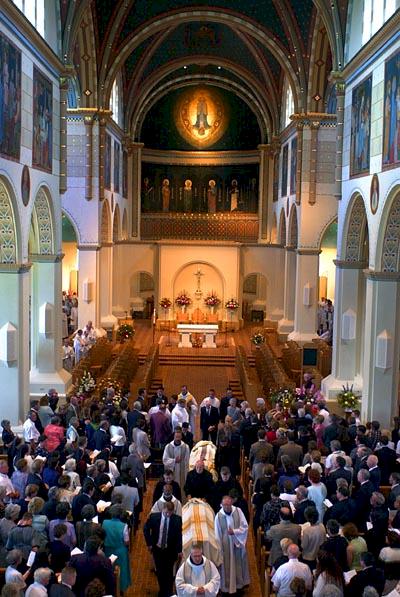 The bodies of the Rev. Philip Schuster and Brother Damian Larson are carried out of the Basilica of the Immaculate Conception in Conception, Mo., Friday druing funeral services. The two were killed in a shooting Monday at Conception Abbey.